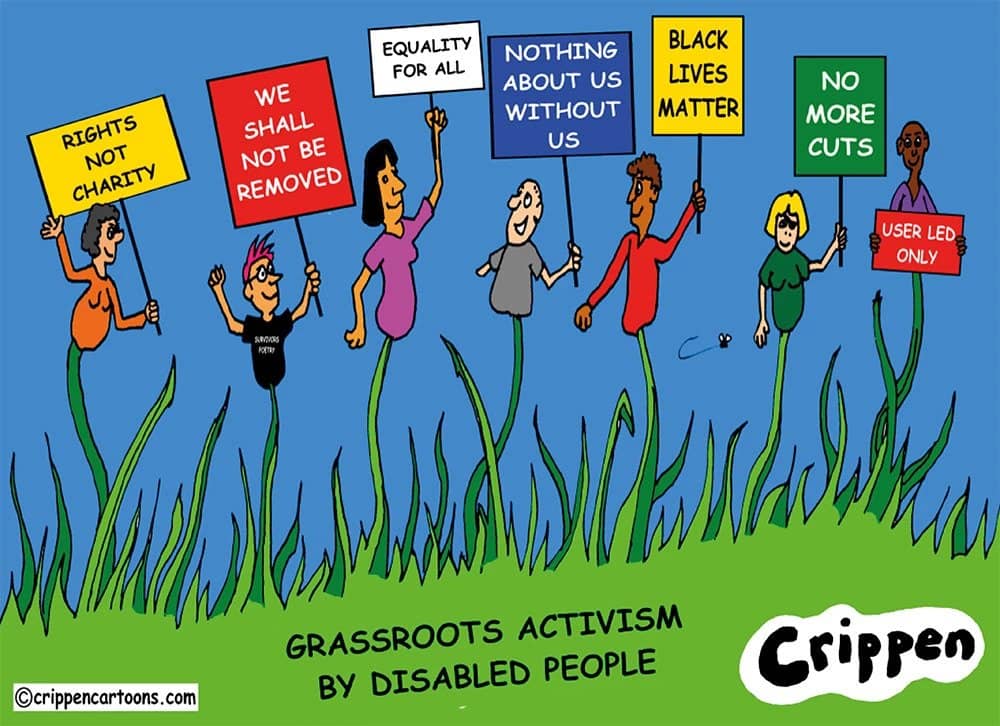 In our last Strategies for Change Session, we had our very own Damien Walshe come and talk to us about Organising for Change.

Damien kicked off the session by inviting us to do a Polling Exercise – Question – if we were to meet Anne Rabbitte (Junior Minister for disability) in 5 minutes (in your opinion), what would be THE ONE ISSUE that we’d discuss with her? – choices included: institutionalisation; access to banking, inaccessible transport; personal assistant services; employment; reasonable accommodation; housing; education; or the lack of participation of disabled people.

Damien told us that he deliberately picked the above because they are all very relevant to disabled people, and almost everyone would say they are equally important. Still, the reality is that it is impossible to deal with them all at once.

Hence getting ourselves organised and using what we have learned over the past year in the Strategies for Change Course is a great start to begin “chipping away at systems that exclude us”, as Catherine so rightly puts it.

While they are no “right or wrongs” in terms of Activism, we need to apply what we have learned over the past 20 sessions to strategise for Collective Change. Subsequently, thinking about what we mean by organising for change, how it happens, what we can do when we get organised, and what we mean by representation are vital first steps to prepare us.

All social change is long-term, it may often seem impossible, but we have seen other movements win, e.g., the Women’s Rights Movement, the LGBT Rights Movement, and the recent Black Life’s Matter Movement – we as activists need to learn

“How they won over the ordinary folk.”

These movements have proved that change can happen, and activism does work when like-minded people mobilise. Damien also told us that it is important to identify, recognise, and celebrate all wins, not just the big successes; this keeps people motivated and driven.

All initial change comes from within. This is about:

might not feel comfortable in being associated with other disabled people (see – www.youtube.com – Changing The Way We Talk About Disability) – “I’m not one of them”

Damien told us that “change is not an endpoint in a journey, it is about the journey itself” (the how’s and ways we collectively work).Change also happens at different levels: personal (as above), organisational, social, cultural, political, and economic. And we need to always keep in the back of our minds that there will always be a resistance to change (see – www.youtube.com – Linh Do – Defying Social Norms for Social Change). This is because large systems are mostly designed and set up to work for those that hold most of the power, perceived or otherwise.

For example, Gender Inequality – many men are resistant to any form of change because they know that “the system is meeting most of their needs“. Non-disabled people will be challenged by disabled people. Disability Organisations will constantly be challenged by Disabled Peoples Organisations. And we have all come to realise as Activists that challenging people’s view of disability is more than exhausting, but “we cannot give up”.

Another point to keep in the back of our minds is that sometimes disabled people (amongst other oppressed groups) can internalise society’s negative values/beliefs (see – www.youtube.com – Talking about disability) and “accept that this is just the way it is and there’s nothing that can be done”. BUT THIS IS NOT THE CASE“.

Also, it is good to remind ourselves that “Activism is a journey and a transformation process for all of us newbies”; and remember what Des Kenny (Chair of ILMI) told us…

“Activism is like a muscle; the more you engage it, the stronger it becomes”

And Niall Crowley (Values Lab) told us that

“We need to become aware of our core set of values and use them whenever we get an opportunity…and the more we use and engage these values, the stronger they become”…

And lastly, know that the Disability Rights Movement in Ireland has made great strides in “shaking up the system”, but there will always be something to be done (see – www.youtube.com – Our fight for disability rights and why we’re not done yet). Nothing is perfect, e.g., we still have considerable ground to cover regarding the provision of accessible transport (see – Personal transport supports for people with disabilites are inadequate, Ombudsman finds), housing (see – ILMI – Video Resources) the right to Personal Assistance (see – Achieving a Right to Personal Assistance in Ireland) are just a few examples.

Irish legislation from 1861 (Offences Against the Persons Act) made homosexuality illegal (a crime). As such, if a person was found guilty of the act of homosexuality, they could serve a ten-year sentence in prison. Additionally, the Church and State framed public attitudes at this time and condemned (see – A short history of the battle for LGBT rights in Ireland) any form of homosexuality. LGBT people were seen as perverted and viewed as sick and needing a cure (see – I was 19, gay and ready to be ‘cured’ by conversion therapy) amongst other things. Subsequently, they were forced to hide their identities, some emigrated, and sadly some died by suicide.

In the 1970’s and early 80’s we saw the emergence of the Gay Rights Movement; David Norris (a proud gay man) initiated a Campaign for Homosexual Law Reform aiming to decriminalise homosexuality in Ireland.

In 1988, David Norris (now an elected Senator) brought a case (the right to be gay) to the European Court of Human Rights and won on specific grounds (see – www.rte.ie/archives – David Norris chairman of the gay rights movement 1975). This case paved the way for future changes to the decriminalisation of homosexuality in Ireland.

In 1993 homosexuality was decriminalised, and in 2010 we saw government enact the Civil Partnership Act. Forms of discrimination based on sexual orientation were also outlawed. In 2011 we saw members of the LGBT community allowed to run for election, and in 2015 we saw Marriage Equality – the right to same-sex marriage. In  June of 2017, Leo Varadkar became Ireland’s first openly gay Taoiseach (see – www.rte.ie/radio/radio1 – Sunday with Miriam). Their strategy was collective. It was simply about the RIGHT to live like everyone else and have Pride in their identity. The core values of this movement included “inclusion, and equality for everyone” (see – https://lgbt.ie).

Does this sound similar? It’s not perfect, and there is more to be done, but the evidence speaks for itself.

Self-Advocacy/advocacy is about an individual advocating (speaking up) about their own issue. It can also be about someone advocating (speaking up) on behalf of another individual. It is usually focused on achieving an individual’s rights or correcting how the system works for the individual. It is important to be aware that, in some cases, advocacy can unintentionally disempower. This is because an advocate can take over. After all, they may know how the system works.

Collective Activism, on the other hand, is about changing how the system works for everyone. It is based on many people’s lived experiences and being actively and collectively involved in all aspects of change. It is about empowerment, being involved and taking inspiration from our fellow peers.

What Do ILMI Mean by Representation

When ILMI talk about representation, it is always based on an individual’s “collective views” to influence policy and service delivery. For example, in the case of Local Housing Disability Steering Groups (HDSG), “an HDSG representative from ILMI” will bring the collective voice regarding the housing needs for all disabled people to the table and not their own. An ILMI HDSG representative may use their lived experience to explain an issue, but they will always come back to the collective voice. They may even talk about the importance of Universal Design (see – www.universaldesign.ie – Definition and Overview).

Representation is also about the effective involvement of people with lived experience: “Nothing about us without us” (see – youtube.com – Tuesdays with Liz: Nothing About Us, Without Us) which, is a complete flip from being “service users” of disability services to becoming “makers and shapers” of policy. It is also about

A Representatives Role Is 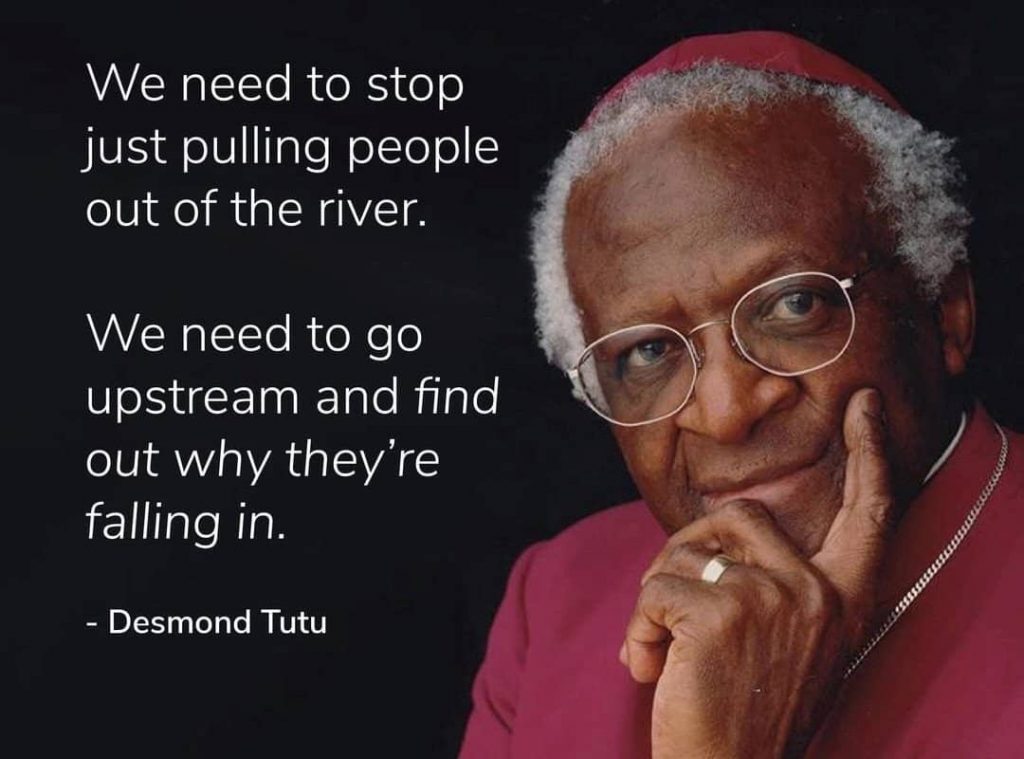 “We need to stop just pulling people out of the river. We need to go upstream and find out why they’re falling in.”

Taken from Thought For The Day: The Perfect Metaphor for the ‘Stuck Schools’ Conundrum from Bishop Desmond Tutu

“TO BE HOPEFUL in bad times is not just foolishly romantic. It is based on the fact that human history is a history not only of cruelty but also of compassion, sacrifice, courage, kindness.

What we choose to emphasise in this complex history will determine our lives. If we see only the worst, it destroys our capacity to do something.

If we remember those times and places—and there are so many—where people have behaved magnificently, this gives us the energy to act, and at least the possibility of sending this spinning top of a world in a different direction.

And if we do act, in however small a way, we don’t have to wait for some grand utopian future. The future is an infinite succession of presents, and to live now as we think human beings should live, in defiance of all that is bad around us, is itself a marvellous victory.”

Taken from www.idlehearts.com – To be hopeful in bad times is not just foolishly romantic.)

The Strategies for Change Activists have decided to form 3 Working Groups.

In the New Year, these Working Groups will be calling out for like-minded disabled people to get involved, so keep an eye out on all our Social Media Platforms in the New Year!